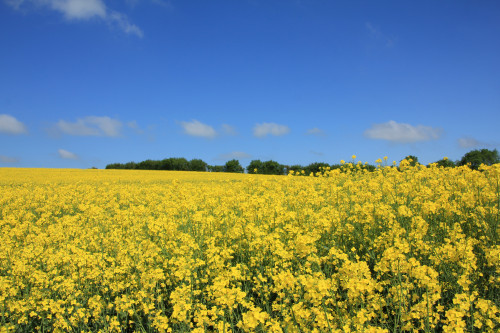 A crop of Acacia oilseed rape has produced a gross output of 7. 04t/ha despite battling against flea beetle damage as it established in the autumn.

Tim Lamyman of Worlaby Farms, near Louth in Lincolnshire, harvested the 9ha of the conventional variety, Acacia on 16th August. He was optimistic when he started combining as the crop stood at just under 5ft tall and was brimming full of pods.

“The crop combined exceptional well for such a thick crop of rape with tree trunk type stems that were up to 2 inches wide.  For a conventional variety, the seed looked exceptionally bold, “he says.

Acacia is the highest yielding variety on the 2020-2021 AHDB Recommended List (RL), and set a new benchmark for oilseed rape yields when it joined the RL. The open pollinated variety is an Anastasia cross, inheriting key agronomic characteristics of strong autumn and spring vigour, solid disease resistance and short, stiff straw, combined with high oil content.

“The field hasn’t had a rape crop on it for the last 20 years,” explains Tim. “Previously the field had continuous spring barley. I chose Acacia for its short straw, fantastic standing power, vigour and being the highest yielding variety on the AHDB list – if we were going to beat the previous best of 7.01 t/ha on the farm it had to be this variety.”

The Acacia was drilled into soils that had been worked with a Lemken Terra-Disc, a Vaardestad Carrier and drilled at 5kg/ha and then rolled.

“As the crop established, the cabbage stem flea beetle moved in, but through a combination of its genetic vigour and an application of Bionature Delta fertiliser, that went on with the insecticide spray (lambda-cyhalothrin) it seemed to give it that extra boost, explains Tim.

“This combination of insecticide for the flea beetle and the fertiliser for promoting rooting and combatting stress saved the crop. No system is fool proof, particularly with oilseed rape,  and especially if you are drilling into a dry seed bed with no prospect of rain, so it’s important to give it every possible chance.”

“So its been more than worthwhile investing in the crop all the way through.”

“By this stage it had started raining, and it felt like it would never stop- but in Jan we had a break from the weather and went on with 1.7 l/ha Astrokerb (500 g/litre propyzamide + 5.3 g/litre aminopyralid) plus 2.5 l/ha Delta K.”