Although the rapeseed  market is characterised by its volatility, oilseed rape is a highly profitable crop that also offers significant agronomic benefits.

This section of the website aims to be a growing resource for technical knowledge transfer, offering advice and guidance about growing a healthy and successful crop.

In terms of profitability, OSR offers the best gross margins of any break crop and is also the 2nd most profitable combinable crop that UK farners can grow.

See the table of estimnated gross margins for Harvest 2021 below: 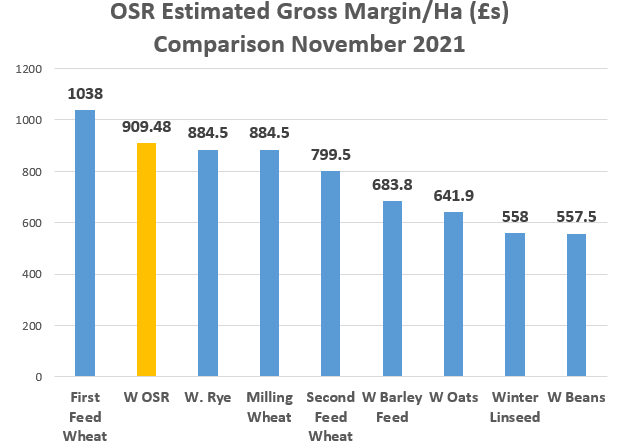 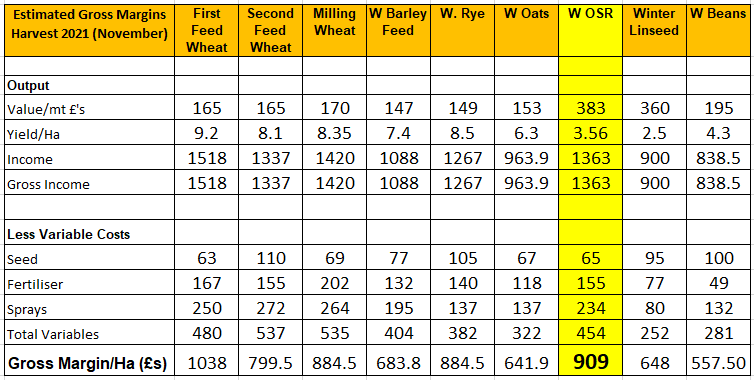 The fight against cabbage stem flea beetle (CSFB) continues for another year, as does the effort to find ways to control the pest. The season began positively with many growers seeing much less damage from the adults in the autumn.

This cause for hope meant that the high larval loads seen in many crops over the winter and spring was all the more demoralising. Nevertheless, overall crop performance is better this year than last, with growers in March/April 2021 reporting that 89% of crops will be taken to harvest compared to 61% in 2020 (data from Bayer’s National Cabbage Stem Flea Beetle Management Study, run in conjunction with ADAS and NIAB).

A new three-year AHDB and industry funded (including United Oilseeds) project commenced in summer 2020. “Reducing the impact of CSFB on OSR in the UK” (led by ADAS and Harper Adams University) aims to improve understanding of the pest’s biology and investigate alternative management methods, and messages are emerging already. Foremost, drill date and the conditions at or around drilling are critical to determining whether crops avoid CSFB or are able to mitigate against the damage caused by the pest.

The key to this is that the CSFB migration tends not to begin in earnest until end August/start September, before peaking in mid-September (although migration can shift slightly geographically and annually).

This means that crops drilled before mid-August are likely to be well established and at a stage that can tolerate significant amounts of adult CSFB feeding damage by the time migration peaks. These crops have the lowest chance of being wiped out by adult CSFB. However, early drilled crops tend to have the highest larval loads in the autumn and spring. This is because CSFB tend to arrive earlier in these crops and the total number that arrive is generally higher. This also means that egg laying and development usually occurs in warmer conditions than in later drilled crops. As a result, more eggs are laid, they develop more quickly and more survive than in later drilled crops.

Crops drilled from mid-September onwards suffer the lowest larval pressure and, because they can emerge after the peak of adult migration has passed, can also experience fairly low adult feeding pressure. Crops drilled between mid-August and mid-September are at greatest risk from adult CSFB, especially those drilled from end August to early September. This is because these crops are at vulnerable growth stages when CSFB migration peaks.

The main caveat to the drill date question is that the presence of soil moisture or the imminent arrival of rain is key. Crops drilled early into dry seedbeds followed by little rain will be at high risk from adult CSFB because they will emerge slowly and unevenly. There are a range of other management options (e.g. trap crops, stubble management, organic amendments) that have been investigated to varying degrees. I suspect that the benefits of each will vary with drill date.

For example, an early drilled crop is likely to be in a strong position to survive adult CSFB damage so management options should focus on mitigating against larval damage. This might include selecting a variety with good spring vigour (to grow away from larval feeding), using a low seed rate (as bigger plants in the spring are likely better able to tolerate larvae) and defoliation (though this should be timed carefully).

Other management options may better suit later drilled crops. For example, approaches that reduce adult feeding damage by deterring or drawing away adult CSFB or make it difficult for them to find the crop (such as leaving volunteer OSR as a trap crop or leaving long stubble) may protect crops that are at vulnerable stages during peak CSFB migration. For crops drilled in the second half of September, choosing a variety suited to the conditions is critical. Project work will investigate management options in trials to identify those approaches that provide reliable control, how to optimise them and how they can be combined with other management options.

Reducing the Impact of CSFB

As our attention shifts from the current crop of oilseed rape still in the ground, to planning plantings for harvest 2019, so too begins the annual feeling of dread shared amongst farmers and agronomists against flea beetles. With the current cultural and chemicals tools available it would be difficult to write an article on ‘flea beetle control’, as in practice complete control seems impossible, so instead we will focus on possible methods of mitigating the risk and hopefully reducing the impact of flea beetle on crops this autumn. Many methods come from shared anecdotal evidence rather than scientific or replicated trials – what works for one farmer may not work for another!

Without doubt the starting point is quality and speed of crop establishment. There are many pieces to the OSR establishment puzzle and the weather, your soil type and your cultivation/drilling equipment will dictate this. In my experience quality of seedbed is key – a one-pass cultivator/seeder may rapidly (and cheaply) plant a crop but in poor conditions can also leave a rough seedbed with poor seed/soil contact and plenty of clods for flea beetles to take cover. Obviously one of the main limiting factors in August/September is soil moisture and it is a fine balance between establishing with least moisture loss and creating a fine, firm seedbed.

Some may prefer to remove straw from the previous crop to improve ease of seedbed preparation and make conditions less favorable for slugs. However, in dry situations the additional residue can help retain soil moisture and get crops off to a quick start. I have seen OSR emerge through significant straw and remain almost untouched by flea beetle whilst neighboring heavily cultivated ‘black’ fields are under severe pressure the day they emerge. So not only is soil moisture important for quick establishment, but is there also a camouflaging effect? Whether it is volunteers from the previous crop, residue, or a companion crop – there is a feeling that we can ‘hide’ the crop and make it slightly more difficult for the flea beetles to find. Field trials are currently on-going to determine whether companion cropping does offer an advantage.

Starter/seedbed fertilizer will help crops to establish quickly, not only Nitrogen but also Phosphate which provides early vigor and a ‘pop-up’ effect. This may be especially important on soils with a low P index or soils where high pH or excessive Calcium reduces the availability of Phosphate. There are many starter fertilizer options available including solid fertilizers such as DAP (Diammonium Phosphate), liquid Ammonium Polyphosphate and micro-granular fertilizers.

As many will be aware, the efficacy of pyrethroid insecticides on flea beetle is generally declining and, in some cases, has been reported as totally ineffective. In this case and as you see the crop being eaten before your eyes it can be tempting to ‘have a go’ with subsequent applications. If the first application was deemed ineffective, it is likely that further attempts will only serve to reduce numbers of Beneficial’s and increase speed of further resistance. On the other hand, there are still many areas where an insecticide application gives the crop some breathing room and OSR rapidly improves or grows away after application. There is anecdotal evidence that spraying at night is more effective as the beetles are more active – you can go out with a torch in the dark and check for yourself, but if you do decide to spray, make sure you remember where the telegraph poles are!

Ultimately, weather after drilling will dictate crop establishment and flea beetle pressure – last autumn the earlier drilled crops in August seemed to be hit hardest, whilst later September plantings enjoyed more rain and got away well. However, by focusing on the basics of good crop establishment and early nutrition then integrating best use of chemical options, hopefully you can reduce the impact of flea beetle on your crop.